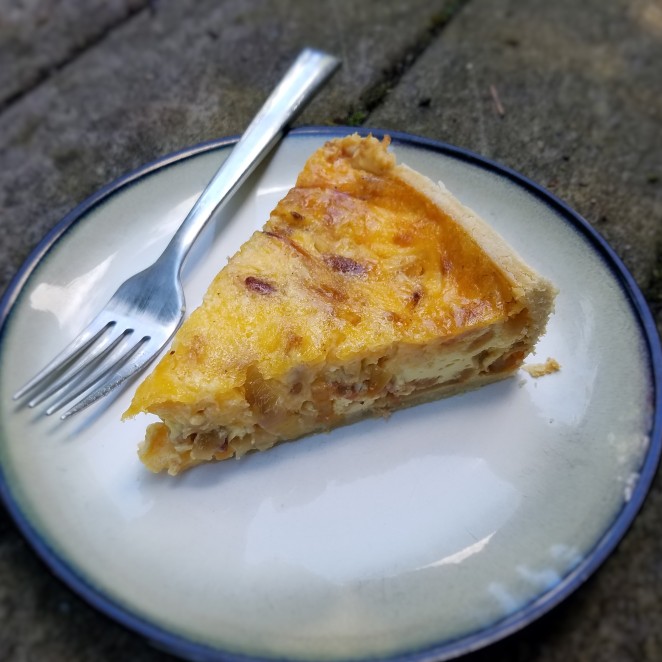 Years ago, my friend Lisa brought Cowboy Quiche to a baby shower and I fell in love, but never actually made it until this year.  You see, usually when I host brunches, I am hosting for other people and they usually have favorite foods that I try to make for them.  This year though, I hosted Mother’s Day brunch and decided to make something that I love for everybody, and it was a total hit.  Such a hit, in fact, that I made another one to bring to Father’s Day brunch at my sister-in-law’s house. 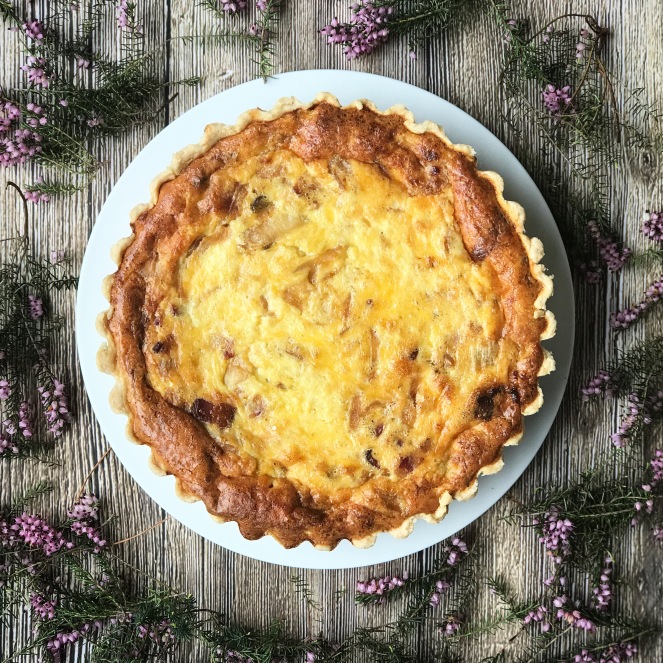 This particular quiche just has some very simple, basic ingredients, so that even the pickiest eaters will enjoy it.  No mushrooms or peppers or anything in this baby.  Just bacon, cheese, eggs, and caramelized onions.  It is unbeatable simplicity and deliciousness. 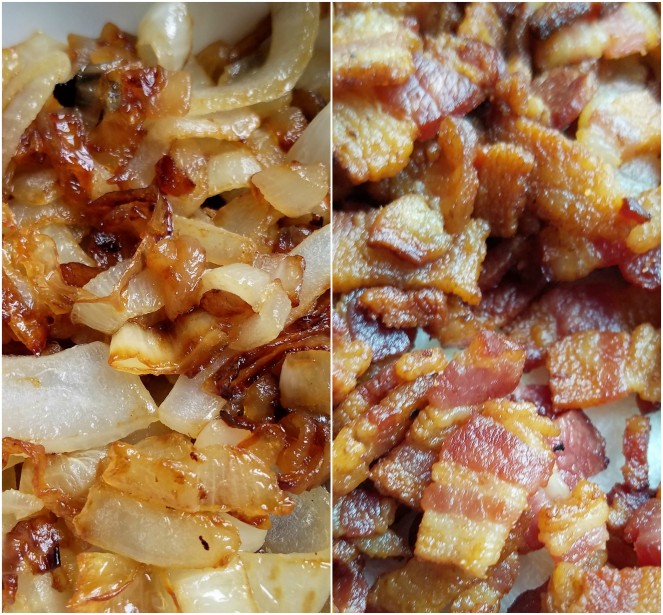 Make your life a lot easier by caramelizing your onions and cooking your bacon the night before and sticking them in the fridge.  Just pull them out when you’re ready to assemble your quiche. 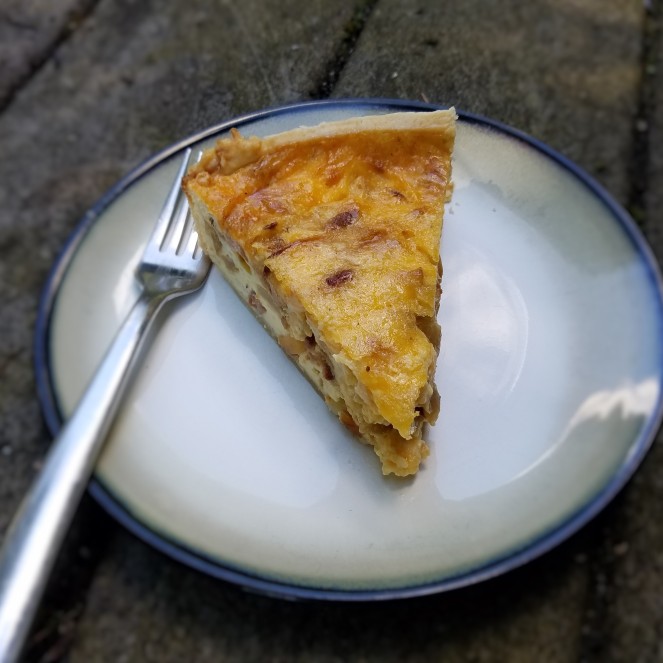 I make a homemade pie crust for mine, but you can easily use a refrigerated crust.  A frozen crust will probably not be deep enough for all of this mixture.  It is supposed to be made in a deep dish tart pan, but my tart pan is shallow like a pie pan, so I put my dough into a 10 inch springform pan.  The removable sides make it really easy to cut up as well, but it isn’t quite as pretty as a tart pan.  You can buy a deep dish tart pan with a removable bottom/sides but I just haven’t done it yet.

Give this one a try! It’s so good that even though I brought this over to my sister-in-law’s house, I took my pictures on her deck after we cut into it so I could share it with all of you.  Enjoy.

Recipe from The Pioneer Woman Cooks

Fry the onions in the butter in a large skillet over medium-low heat for at least 15 to 20 minutes (maybe longer), stirring occasionally, until the onions are deep golden brown. Set aside to cool. (I do this the night before)

Fry the bacon until chewy. Chop into large bite-sized pieces and set aside to cool. (I do this the night before)

Preheat the oven to 400 degrees. Roll out the pie crust and press it into a large fluted deep tart pan (or a deep dish pie pan).

Whip the eggs, cream, salt and pepper in a large bowl, then mix in the onions, bacon, and cheese. Pour the mixture into the pie crust.

Place the pan on a rimmed baking sheet, cover lightly with aluminum foil, and bake it for about 40 to 45 minutes. Remove the foil and continue baking for 10 to 15 minutes, or until the quiche is set and the crust is golden brown. (The quiche will still seem slightly loose, but will continue to set once remove from the oven.)

Remove from the oven and allow to sit for 10 to 15 minutes. If using a tart pan, remove the quiche from the pan, cut into slices with a sharp serrated knife, and serve! 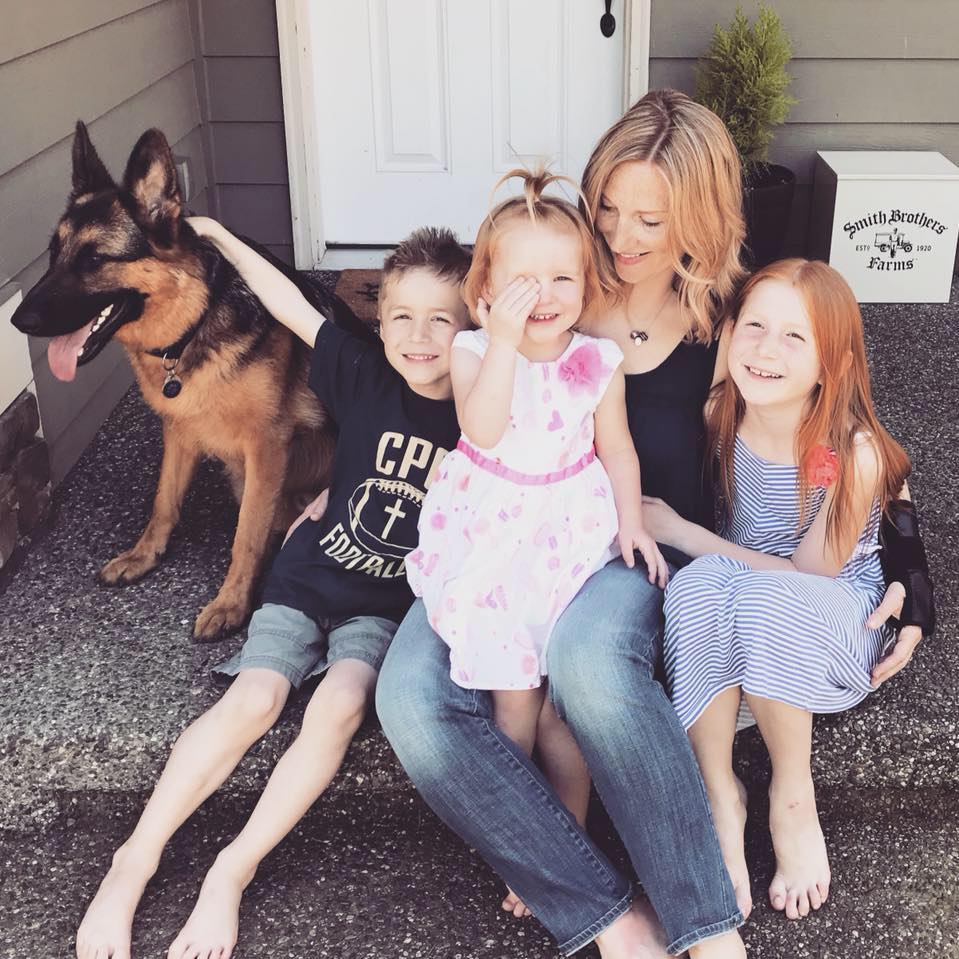 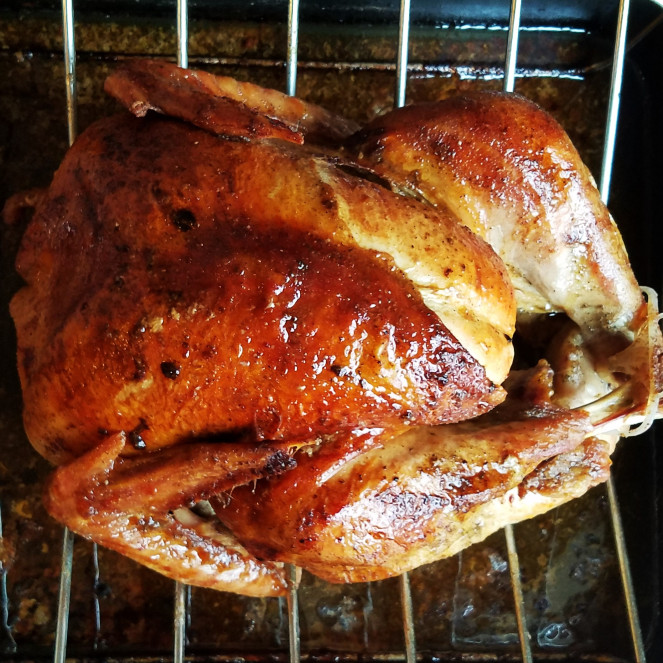